A matrix-calculus approach to deriving the sensitivity of cross-entropy cost to the weighted input to a softmax output layer. We use row vectors and row gradients, since typical neural network formulations let columns correspond to features, and rows correspond to examples. This means that the input to our softmax layer is a row vector with a column for each class.

into a normalized row vector

The transformation is easiest to describe element-wise. The th output is a function of the entire input , and is given by

Softmax is nice because it turns into a probability distribution.

Softmax is invariant to additively scaling by a constant .

In other words, softmax only cares about the relative differences in the elements of . That means we can protect softmax from overflow by subtracting the maximum element of from every element of . This will also protect against underflow because the denominator will contain a sum of non-negative terms, one of which is .

Since softmax is a vector-to-vector transformation, its derivative is a Jacobian matrix. The Jacobian has a row for each output element , and a column for each input element . 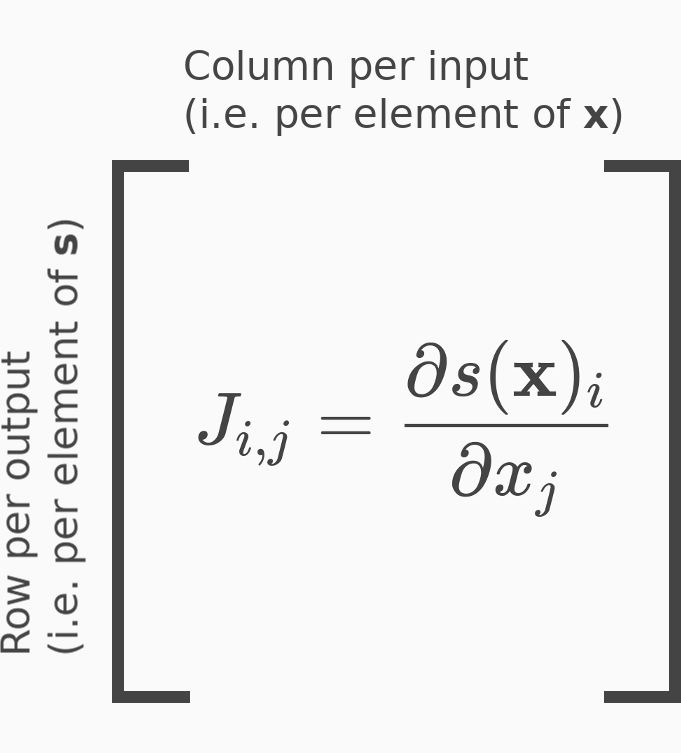 First compute the diagonal entry of row . That is, compute the derivative of the ‘th output, , with respect to its ‘th input, . All we need is the division rule from calculus.

This is nice! The derivative of softmax is always phrased in terms of softmax.

From now on, to keep things clear, we won’t write dependence on . Instead we’ll write as and as , understanding that and are each a function of the entire vector .

The form of the off-diagonals tells us that the Jacobian of softmax is a symmetric matrix. This is nice because symmetric matrices have great numeric and analytic properties. We expand it below. Each row is a gradient of one output element with respect to each of its input elements .

Notice that we can express this matrix as

where the second term is the outer product, because we defined as a row vector.

Jacobian of softmax in Python

Cross-entropy measures the difference between two probability distributions. We saw that is a distribution. The correct class is also a distribution if we encode it as a one-hot vector:

where the appears at the index of the correct class of this single example.

which is the dot product since we’re using row vectors. This formula comes from information theory. It measures the information gained about our softmax distribution when we sample from our one-hot distribution.

where we used equation (69) of the matrix cookbook for the derivative of the dot product.

Gradient of cross-entropy in Python

Error at input to softmax layer

By the chain rule, the sensitivity of cost to the input to the softmax layer, , is given by a gradient-Jacobian product, each of which we’ve already computed:

The last line follows from the fact that was one-hot and applied to a matrix whose rows are identically our softmax distribution. But actually, any whose elements sum to would satisfy the same property. To be more specific, the equation above would hold not just for one-hot , but for any specifying a distribution over classes.

Error at input to softmax layer in Python

Now with a batch of examples

Our work thus far considered a single example. Hence , our input to the softmax layer, was a row vector. Alternatively, if we feed forward a batch of examples, then contains a row vector for each example in the minibatch.

Softmax is still a vector-to-vector transformation, but it’s applied independently to each row of .

Because rows are independently mapped, the Jacobian of row of with respect to row of is a zero matrix.

That means our grand Jacobian of with respect to is a diagonal matrix of matrices, most of which are zero matrices:

Jacobian of batch softmax in Python

Let each row of be a one-hot label for an example:

The above simplification works because each row of is . So each column of is . So the matrix product dots rows of with columns of , which is exactly what we want for cross-entropy. Now, we only care about entries where the row index equals the column index. That’s because cross-entropy sums the dot products of matching rows of and . We can sum over matching dot products by using a trace.

Note: this formulation is computationally wasteful. We shouldn’t implement batch cross-entropy this way in a computer. We’re only using it for its analytic simplicity to work out the backpropogating error. However, the end analytic result is actually computationally efficient.

Mean cross-entropy of batch in Python

Jacobian of mean cross-entropy of batch

Since mean cross-entropy maps a matrix to a scalar, its Jacobian with respect to will be a matrix.

Since is an element-wise operation mapping a matrix to a matrix, its Jacobian is a matrix of element-wise derivatives which we chain rule by a Hadamard product, rather than by a dot product.

This procedure is always true for any element-wise operations. We can see this by concatenating the rows of .

such that is a row vector of length . Then is an element-wise vector-to-vector transformation again. So it has an diagonal Jacobian matrix.

If we flatten in the same way

Now since and are each of length , we can reshape this formulation back into matrices, understanding that in both cases the division is element-wise:

and we have our result.

Jacobian of mean cross-entropy of batch in Python

Error at input to softmax layer for batch

We apply the chain rule just as before. The only difference is that our gradient-Jacobian product is now a matrix-tensor product. Multiplying a matrix against a tensor is difficult. One approach is to flatten everything, do a vector-matrix product as before, and then reshape everything, but this is not elegant or intuitive. Instead, we dot rows of , each a gradient of a row-wise cross-entropy, against diagonal elements of , each a Jacobian matrix of a row-wise softmax.

We are able to do this because of the fact that is diagonal, which breaks the matrix-tensor product into an element-wise dot product of gradients and Jacobians. We owe this entirely to the fact that softmax is a row-to-row transformation, such that its Jacobian tensor is diagonal.

Where the third step followed by the fact that is diagonal. So the sensitivity of cost to the weighted input to our softmax layer is just the difference of our softmax matrix and our matrix of one-hot labels, where every element is divided by the number of examples in the batch.

Error at input to softmax layer for batch in Python